The last two days of my journey consist of several small excursions, the first of which is Devil’s Postpile National Monument, a comparatively microscopic park (when compared to Yosemite, King’s Canyon, Death Valley, etc.) nestled in a valley in the Sierras. The approach to Devil’s Postpile takes me through Mammoth Lakes, CA, a ski resort town, which marks my entrance into tourist country. After spending several days either in the backcountry or the lonely White Mountains, the transition is more jarring than I was anticipating. When I get on the trail, I have to interact with tourists as opposed to hikers, which are characterized by the following: toddlers squeezing every last decibal out of their tiny vocal chords to express their disatisfaction, young mothers struggling to heave strollers through patches of sand, obnoxious teenagers playing unfortunate music through the tinniest Bluetooth speaker money can buy, and worst of all, litter.

The park is miniscule and basically has one trail, though it does connect to other trails that go elsewhere; in fact, Devil’s Postpile is right off the route of the John Muir Trail. The feature itself is less than half a mile from the trailhead. Devil’s Postpile is a rock formation of lava tubes hardened into stone that form a wall of hexagonal prisms rising out of the earth in a way that seems like it could have alien conspiracy theories surrounding its formation. It’s really quite a curiosity, and honestly doesn’t look entirely natural. I take the short but steep path to the top of the formation which is a floor of brownish hexagonal tiles that looks like suburban 70s bathroom floor meets medieval castle floor.

The trail continues another 2 miles along the San Joaquin Middle Folk Fiver through burnt forests (from a fire in 1990s) to Rainbow falls, a waterfall of substantial size and volume. The falls are quite impressive, though unfortunately large waterfalls aren’t the best for listening to music.

The story of Devil’s Postpile is a familiar one, though no less inspiring. The land was actually originally part of Yosemite National Park, but the borders changed in 1905, transferring it to the Sierra National Forest. Later there were plans to dynamite the whole formation for the purposes of a hydroelectric dam, though people banded together and saved the feature through the creation of Devil’s Postpile National Monument by President Taft in 1911. Something to keep in mind in present challenging times.

After the morning there I proceed to Bodie State Park, which is one of the best preserved ghost towns in the United States. By this time the weather had turned, and there was a lightning storm with a light rain, which made the ruins seem all the more dismal, in an atmospheric way. Bodie was one of many old mining towns in the west that quickly boomed and quickly busted. At its height around 1880, it had about 8,000 people, and like many such towns, it had a rough and tough reputation: it had 60 saloons, a thriving red light district, and even a Chinatown complete with opium dens. There were also 35 Paiute Natives, only one of whom had a name in the census: “Captain Bob.” While only a small fraction of the town still survives, even that is still an impressive several hundred structures, mostly wooden shacks returned to the forces of Mother Nature to do with them what she wills. The California State Parks purchased the town in 1962 to preserve historic structures and artifacts. Experiences like this make me thankful that I live when I do.

The piece I select for this experience was a piece from the Peer Gynt Suite by Edvard Grieg called “the Death of Ase.” Other movements from the suite, such as Morning Mood and In the Hall of the Mountain King are well-known among the general populace, if not by name, and often appear in cartoons. This movement, however, is among the most sullen and despondent as has ever been written. Featuring just the strings (Grieg had also read Rimsky-Korsakov it seems), it’s slow and heavy, seemingly carrying the weight of generations worth of tragedies. The first phrase begins quietly and speaks of a primordial sorrow. It repeats several times until it’s practically booming in anger, before slowly expiring a final time. Among the rain and lightning, the music makes me mourn the residents of this god-forsaken town as if I knew them. 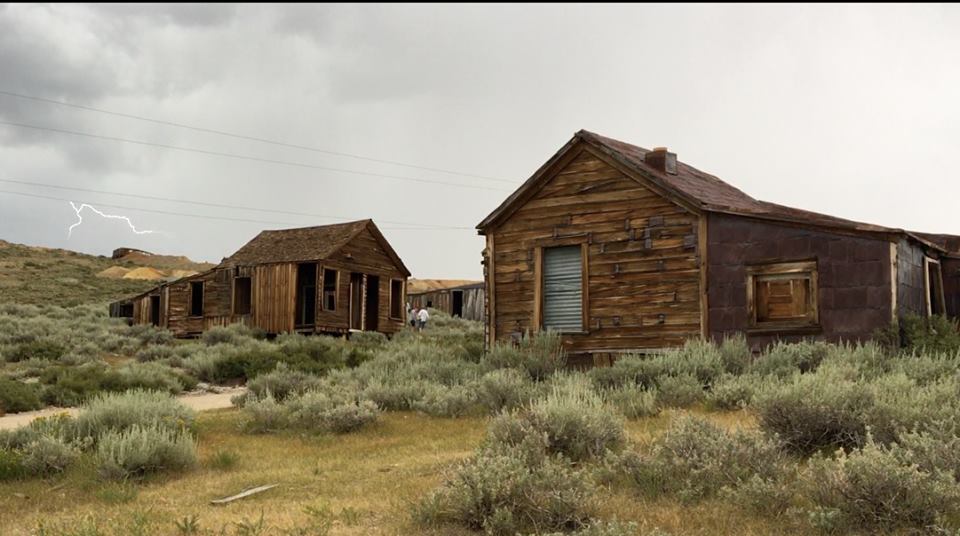 The next morning I head to Mono Lake, an enormous and very old lake on the western edge of the Great Basin. The Great Basin is a huge area between the Sierras and the Rockies out of which water does not flow, and just as the Great Salt Lake in Utah marks the eastern border of the Basin, so does Mono Lake mark its western edge. The lake is a crucial habitat for millions of birds on their migration routes that feast on the brine shrimp that thrive in the salty water. One unique features of the lake are the giant tufas, intricate pillars of minerals that rise up from the shores like the giant termite mounds of the Serengeti. Mono Lake used to be much larger and much deeper; however when the rivers and streams that supply lake were diverted for irrigation and cities, the lake’s level plummeted. A law was passed that mandated a certain level for the lake due to its importance to the environment; however without addressing any of the causes of the lake level, the law is in a constant state of brokenness. Sunrise at the lake is gorgeous, with the sun lighting up the tufa columns brilliantly and with Mount Dana in Yosemite regally overseeing the event. While not incredibly well-known, it’s one of those places that seems to get absolutely stunning sunrises, probably just about daily.

From the Owens Valley I climbed into the Sierras into Yosemite National Park. I had been to Yosemite before and unfortunately most of the park was blanketed in a layer of smoke, so this visit to Yosemite would be much more brief than it deserves. I had originally planned to backpack to Cloud’s Rest and then summit Half-dome, among the most iconic spots in the country and the apex of the trip. Wreathed in smoke however, it would have to wait. I stopped at Tenaya Lake, one of the larger alpine lakes in the park. The eastern edge of the lake has a small sandy beach where families and children can often be found. There’s a short hike around the lake that is very typical Yosemite: beautifully sculpted granite mountains and hills that surround the lake in a picture-perfect postcard view. It was still early enough that there are few people around; nevertheless I go to the more secluded west end to start the hike.

Ellery Lake on the way to Tenaya Lake

I hadn’t planned on getting in per se, but at a certain point it beckons to me. I wade to a rock about 20 feet into the lake. Steam was rises from the surface as the morning sun shines in its full brilliance. I sit on this rock and put on a piece just for this occasion: The Swan of Tuonela by Jean Sibelius. It begins in the basses and cellos with chords that slowly are transferring to the violas, and then the violins, slowly rising from the depths in a way that is both obvious but imperceptible. The piece heavily features the English horn, an instrument that sounds as beautiful as it does strange. As the English horn wanders through the curtains of strings, so do my eyes wander through the curvaceous domes of granite on the other side of the lake, absorbing their majesty one last time before returning to the humdrum of daily life. The piece ends with an ascension of strings just as in the beginning; and as it does so, so does the last plume of steam dissipate off the lake into the aether.

The water beckons further and I go for a quick swim in the clear blue alpine waters. It’s cold, but not frigid; downright pleasant when it comes to high alpine lakes like this. It’s quite shallow on this end of the lake, hardly hip deep. I return to my rock and let myself be enveloped by the warmth of the rock and the sunlight. Life is good.

I eventually peel myself off of the rock and put my clothes back on, back to the car and back finally home to San Francisco. It was my first extended trip since my planning frenzy and while most of it didn’t go according to plan, it was still a helluva memorable trip: my first time really backpacking, my first 3 mountains climbed, my first 14er, the oldest trees in the world, and deep sense of emotional catharsis that I desperately needed.